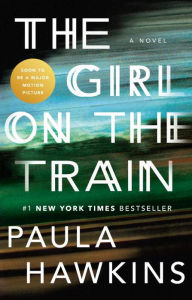 The Girl on the Train is a psychological thriller narrated by three women. The main narrator is Rachel, whose heavy drinking has cost her both a marriage and a job. She unhappily shares a flat with someone she knew at college and, instead of letting her roommate know she lost her job, she keeps up the façade of her old routine by taking the same train into London every morning, sipping canned gins and tonic. The train goes by her old house, where her ex-husband (Tom) lives with his newish wife (Anna) and their newborn baby. The train also passes a house where a handsome couple (Megan and Scott) live; Rachel sees them breakfasting on their deck and projects a life of bliss: a perfect marriage, perfect home, perfect jobs. “He is dark-haired and well built, strong, protective, kind. He has a great laugh. She is one of those tiny bird-women, a beauty, pale-skinned with blond hair cropped short.” She continues, “They’re a match, they’re a set. They’re happy, I can tell. They’re what I used to be, they’re Tom and me five years ago. They’re what I lost, they’re everything I want to be.” Every day is the same – until it isn’t. One morning, Rachel is shocked to see Megan kissing another man. The next day she hears on the news that Megan has gone missing. Rachel goes to the police, but, because of her drinking, is deemed an unreliable witness. Rachel herself isn’t completely sure what she remembers or what really happened. She gathers the nerve to go to Scott under the guise of being a friend of Megan’s and learns that Megan was seeing a therapist. Rachel boldly books an appointment with the therapist to see what she can learn. The plot thickens when Rachel learns that Megan has been babysitting Anna and Tom’s newborn baby.

Megan, the second narrator, is not anything like Rachel imagined. She is restless with Scott and having an affair with her therapist. She used to work in an art gallery and longs to be a free spirit, but feels out of place and confined in her suburban neighborhood. Megan is bored, edgy, and unhappy, until the day she disappears – never to be seen again.

Anna, the final narrator, initially gloats about her victory in winning Tom away from Rachel. Rachel is infertile, but Anna and Tom immediately conceive a baby. As the story moves along, Anna and Rachel learn they have more than their love of Tom in common.

The author, Paula Hawkins, does a masterful job of portraying the story through the vantage points of the three women. With changing timelines and alternating accounts, she spins a tight ,suspenseful tale. I could not put this book down. A movie adaptation, starring Emily Blunt and directed by Tate Taylor, is scheduled for release on October 10.

Watch Bryan on WZZM Channel 13’s “My West Michigan” show at 9:00 a.m. on Wednesday, October 5. Join The Book Nook’s monthly book club at 6:00 p.m., Wednesday, October 5 for a discussion of The Girl on the Train at the Book Nook & Java Shop in Downtown Montague with refreshments, snacks, beverages, and camaraderie; of course, everyone is welcome, and the Club meets monthly all year long. Get 20% off the Book Club’s book selection all month, too.