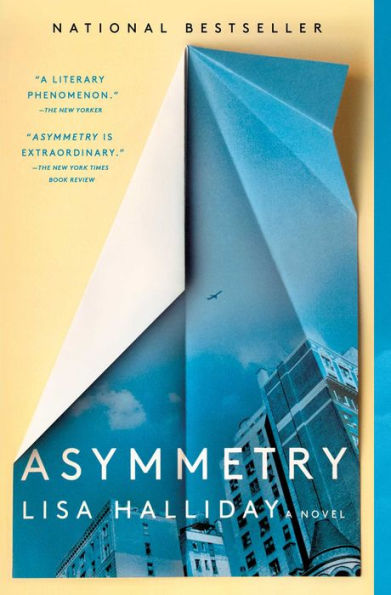 Listed as one of New York Times top 10 books of 2018, Asymmetry is a literary phenomenon that satisfies on multiple levels.  On the basic level, the novel offers two engaging, purposely unrelated stories, exquisitely written.  At the next higher level, there are delicately subtle “blink-and-you-will-miss-it” threads that tie the sections together. Still higher, the novel explores asymmetry and inequities in age, power, talent, wealth, fame, geography and justice.  And at the meta level, the novel questions the writing of fiction itself.

The first section of the novel, “Folly,” begins with a meeting in a New York City park between Alice, a 25-year-old editorial assistant, and Ezra Blazer, a famous and critically acclaimed novelist in his seventies. Ezra asks Alice, “Are you game?”  The two swiftly begin an unconventional, tender romantic relationship whose duration spans the section. Ezra gives her books to read, among other odd gifts, and they watch baseball together and talk about literature. He teaches her how to pronounce Camus (“It’s Ca-MOO, sweetheart. He’s French.”). One day, on a walk, Alice confesses to him that she was doing some writing of her own. When he asks whether she writes about their relationship, she said she does not, and that she would rather write about people “more interesting” than her.

As their relationship grows closer, Alice begins to wonder about how it fits into the course and direction of her life. Ezra is in declining health, in need of regular medical attention, and frequently physically dependent on Alice. When she tells him that she does not think she can continue their relationship, Ezra says, “Don’t leave me. Don’t go. I want a partner in life. Do you know? We’re just getting started. No one could love you as much as I do. Choose this. Choose the adventure, Alice. This is the adventure. This is the misadventure. This is living.”  The section ends with this open question.

The novel’s second section, “Madness,” begins with the detention by immigration authorities of an Iraqi-American practical economist named Amar Jaafali at London’s Heathrow Airport in 2008. Amar is on his way to visit his brother, Sami, in Kurdistan, and has planned to stop in London to visit friends there for a couple of days, including a foreign war correspondent.  The Kafkaesque action of Amar’s detention is interchanged with his recollections of his childhood and early adulthood.

The style of the first section is mostly unemotional dialogue.  The second section is told from Amar’s first person highly sensitive perspective.  In Amar’s story, we get the day-to-day effects of war on his family in Iraq and the often-disconnected perspective of western journalists who tend to arrive in the Middle East with preconceived notions about the region. However, the longer they stay in the region and actually experience it, the more disproven their notions become.  “There’s an old saying about how the foreign journalist who travels to the Middle East and stays a week goes home to write a book in which he presents a pat solution to all of its problems. If he stays a month, he writes a magazine or a newspaper article filled with ‘ifs,’ ‘buts,’ and ‘on the other hands.’ If he stays a year, he writes nothing at all.”

The third section of the novel – “Ezra Blazer’s Desert Island Discs” – consists entirely of a transcript of a recording of a BBC interview with Ezra Blazer for its “Desert Island Discs” series, in which guests choose their favorite musical recordings, which are played between their responses to interview questions. In the interview Ezra reflects on his life and work, and the transcript ends with him asking the female interviewer on a date, posing the same question to her that he did to Alice in the novel’s first section: “Are you game?”

It’s rare that a book continues to pose questions and engage a reader on so many levels long after the final page is read.  I highly recommend embarking on this literary adventure.  Are you game?

Watch Bryan on WZZM Channel 13’s “My West Michigan” morning show at 9:00 a.m. on Monday, January 7.  Join The Book Nook’s monthly book club at 6:00 p.m., Wednesday, January 2 to discuss Asymmetry at the Book Nook & Java Shop in Downtown Montague with refreshments, snacks, beverages, and camaraderie; of course, everyone is welcome. The Club meets monthly all year long.  Get 20% off the Book Club’s book selection all month, too.